skip to main | skip to sidebar

Year of the Carnivore Blog

YEAR OF THE CARNIVORE Official Trailer!

At long last, here is the YEAR OF THE CARNIVORE Official Trailer!
YOTC opens in Toronto, Montreal and Vancouver June 18th. (everyone sing: "start spreading the news...":) In Toronto it will screen at the AMC Movie Theatre at Yonge & Dundas. Other venues TBA. For updates check go to www.yearofthecarnivore.com
Buck 65, Adam Litovitz and I are also putting out a concept album of original music inspired by the movie on Last Gang Records.  www.lastgangrecords.com 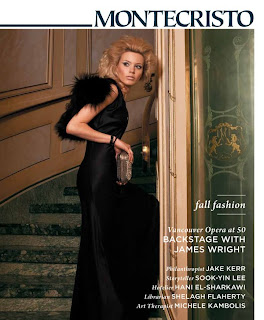 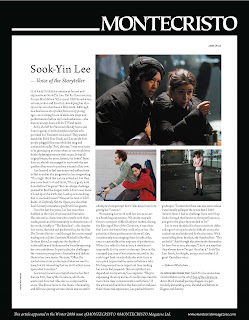 Check out this article that Vancouver-based magazine, Montecristo, just published in their fall issue!
Posted by YOTC Blogger at 6:15 PM No comments: 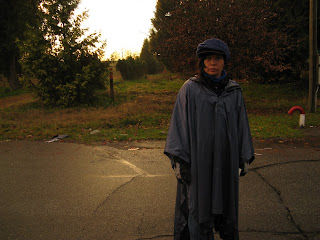 Behind Big Apple Food Town (a.k.a. IGA Marketplace), lies a boundary. The long stretch of pavement cracks before submitting to the unkempt growth of alders, cedars, bramble, and high grass. Like a river meeting the sea, these two landforms merge at a distinct but wavering line. 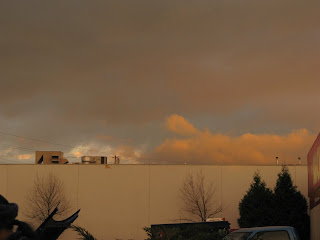 It’s here where Sammy embarks. Within a lunch break, she is able to cross the parking lot and delve into the privacy and intimacy of the woods. 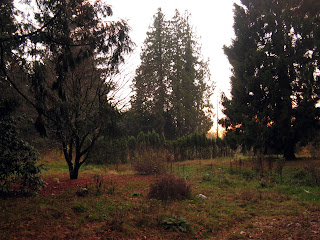 And maybe it is because I grew up in the nearby ‘burb of Surrey (now closer to Maple Ridge via the new Golden Ears Bridge) that I connect with this setting so strongly. Both cities, the products of many jokes and astronomical growth in the past 10 years, are themselves in process of finding their identity. 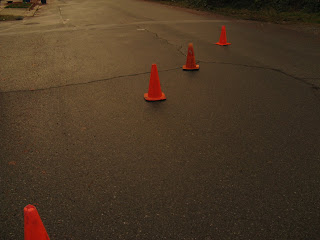 For this reason in seems that Sammy’s quest extends to the land she inhabits. For instance the cramped, vacant, and un-sellable condominiums (i.e. the set for Todd and Kathy’s Apartment), which sit awkwardly beside undeveloped forests, are by-products of miscalculated risk. And now with the boom in housing prices the bridge has brought, this transformation is still in process. 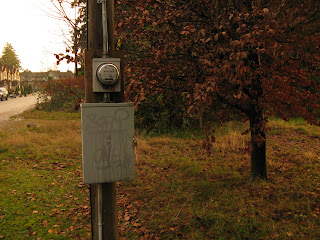 And it’s inevitable that after such life changes, things will no longer the same. There is no return from Sammy’s loss of innocence. Nor will she recognize the township where she lost it. For both time and place are precious. 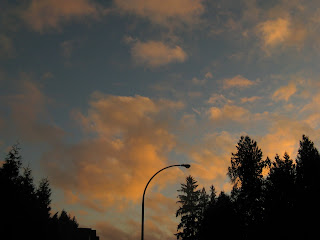 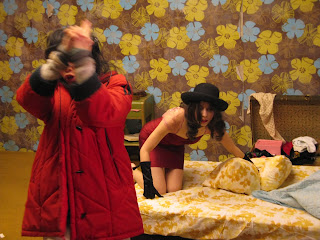 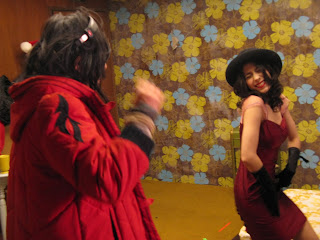 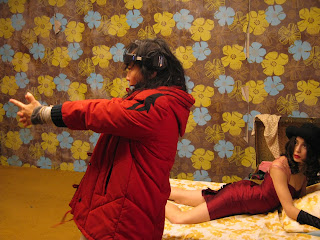 The last of our shoot ended in Sammy's apartment. Once the head office for Macellum Motors, this enclosed four-walled chamber quickly became a hot set. With most of the crew holding in the hallway, and those inside squeezed to stay out of shot, it was a real fight to get the scenes right.
In one of Sammy's final transformations, she finds her groove by allowing herself to get dirty. While nerves could of been pinched by time and space, Sook-Yin opted to demonstrate these aerobic moves herself. (Take note of the three layers underneath the red parka with black stallion tails).
And although the physical stress was demanding, setting the atmosphere for the actor to preform was most important. What better way to feel the groove than to have your director cut an orange rug?
-Edward
Posted by YOTC Blogger at 8:51 AM 1 comment:

FROM THE CARNIVORE FRONT

Thank you Edward Westerhuis, my trustee assistant director, for posting those fab photos of snow covered Vancouver we had to blow dry to look like summer during the YOTC film shoot in Maple Ridge last winter! And to Trey Agnew, "Punk King" for his entry. I understand he had the audience in stitches during the 2nd YOTC public screening at TIFF. God bless the King.

Okeedoke. First of all, spread the news! YOTC is making it's way to film festivals across Canada:

Next up, I want to share some swell animated short films to my stories that originally aired on my radio show DNTO! (www.cbc.ca/dnto). They're directed by Jim Goodall, Jon Izen and Anne Marie Fleming. Fabuluz.

And now that we all survived getting TIFFED, here's a smattering of Year of the Carnivore press post Toronto International Film Festival. It's just enough to start generating buzz before we roll YOTC out in 2010 in theatres.

Sook-Yin
Posted by YOTC Blogger at 7:07 PM No comments:

YEAR OF THE CARNIVORE PREMIERE!

The premiere of Year of the Carnivore last night was....A TON O' FUN!!! After a week-long panic-attack-almost-nervous-breakdown, my fever broke and my water broke, and we finally jettisoned our baby movie out of the plane with a parachute and it landed and bounced without a broken bone. The Toronto International Film Festival audience was warm and generous. They were responsive and really focused on the film. I love the sound of a burst of laughter and the occasional individual guffaw of the one person who connects with a single moment, just cause. It was great to see cast and crew members fly out from Vancouver: Ali Liebert, Emily Holmes, Bethany Brown and Trey Agnew, Erin Smith and Helga Ungerait plus Toronto friends Sheila McCarthy and Mark Rendall. Sadly Mark's grandpa passed away a few days ago and Mark was in Montreal for his funeral and missed the premiere. But like a trooper, he landed at the airport in downtown Toronto and made a b-line for the theatre to make the Q & A after the screening! With us in spirit was the awesome Cristin Milioti who, unfortunately couldn't make it cause she's in the middle of a play in NYC without an understudy. She is a stunner on screen. I am so proud of her.

Later at our after party at Rolly's garage, there was a lot of drinking and music making and celebration. Adam and I had fun playing songs and Mark and Buck 65 made beautiful music. Mark encouraged everyone to make ghost sounds while he played slide guitar with his flaming lighter and Rich (Buck 65) slays me every time with his verbal ferocity. So wonderful to be with friends.

This morning I woke up drunk and went back to sleep again. Tonite, I feel relief, now that the gut wrenching worry has lifted. I will take the time to savour this and remember I needn't have been so scared.

To everyone there, thanks for sharing the experience with me!

In the spring time of my love, I have forgotten the minus weather.

The tracking shot of the lovers biking was originally set to be riverside. At the start of the shoot, it looked good: green grass, a set of train tracks, and a parallel-running road to shoot from. We just needed a gap in the schedule to get the shot.
Then the river froze over and the snow fell. The smooth flowing Fraser became a jagged range of ice. 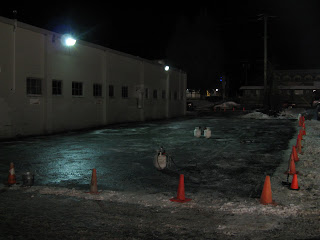 Sook-Yin then decided to find an alley way, or a stretch of building to shoot it against. She chose the line of brick facing the parking lot of our film studio/used car dealership. The production team then set to torch the frozen lot. 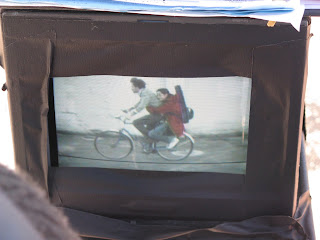 When considering the river, we discussed what affect it might have on the imagery. It could represent a new freedom the two have together, or endorse a coming of age theme, but on the other hand it could inconsistent with other locations. By using the wall, this shot still expresses freedom, but contains it in a world locked in industrial suburbia.
Posted by YOTC Blogger at 11:04 AM No comments:

YOTC Blogger
YEAR OF THE CARNIVORE is a romantic comedy drama about a girl who's in love with a boy who thinks she's bad in bed, so she goes out to get more experience. It's a movie written and directed by Sook-Yin Lee, produced by Screen Siren Pictures and The Film Farm and starring the most awesome Cristin Milioti, Mark Rendall, Ali Liebert, Will Sasso, Kevin Mcdonald, Sheila McCarthy and many many more! YEAR OF THE CARNIVORE will have a theatrical release in 2010. This blog is where the YOTC cast and crew share whatever the heck they want to! You can join the conversation too in the comments section. We'd love to hear from you! To know more about YOTC, go to www.yearofthecarnivore.com